TOURS:
Tuesday - Saturday
by appointment only. 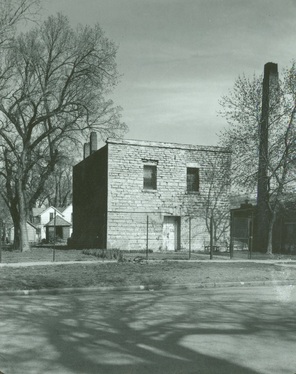 It was decided in 1868, that the county was in desperate need of a jail. A great controversy centered around the jail before it was even built.  Dangerous criminals were taken to Franklin County's jail in Ottawa, and cost the deputy or sheriff $72 per full-week trip for meals, lodging, and horse hire.  For the non-violent criminals, there was also no local incarceration option. "Instead they are boarded at an exorbitant expense in public houses, rollicking the fattening at public expense," a grand jury alleged, "thus encouraging crime in our midst." Then, in 1869 after a long, bitter fight over the location of the County Seat of Allen County, the citizens approved a $10,000 bond issue and the jail was erected for $8,400.

The Old Jail is a limestone building.  Much of the floor on the lower level is made of Bandera marble, which is a type of flagstone rock found around Redfield in Bourbon County.  At one time the entire structure was covered with rough stucco, but was all later removed in various phases, the last being in 1986.  The stone walls were made two feet thick and wooden cells with iron bars were installed on the lower floor with quarters for the jailer on the upper floor. According to newspaper accounts, the jail opened in October 1869, but the first entry in the jail register is for February 4, 1870.

From 1869 to 1891 the lower floor contained wooden cells and the windows were smaller and higher then they are now.  No record of the solitary confinement cell exists, but its placement is believed to be accurate.  The exact layout of the rest of the lower floor in those early years is also not known.  At the time of construction, no stairs were inside the building, but instead, an iron stairway to the second floor was located on the east (back) side of the jail.

The wooden cells were replaced in 1891 by a large, steel cage manufactured in Kentucky and brought to Iola for assembly.  An article regarding the steel cage appeared in the Iola Register on December 4, 1891 and states, "even if the walls of the jail were torn down the prisoners could not escape.  The cell doors are locked and unlocked from the cases outside the cell so the jailer runs no risk whatever in locking up his prisoners."  The cases mentioned in the article hold several levers with which the various cell doors can be opened and closed from outside the cage.  Despite the article’s claim, several prisoners did escape on at least one occasion when the jailer carelessly forgot to relock the cell doors.

A few dangerous criminals and hundreds of minor offenders were confined in the jail over the years.  Quite a few prisoners escaped confinement from the jail over the years, many by removing the iron bars on the windows or by cutting a hole in the roof.  Only a few months after the jail was opened, a small mob of men overpowered the sheriff and removed E.G. Dalson from the jail on the evening of June 27, 1870.  He was then taken to a barn outside of Iola and hanged.  He had been jailed on charges of murdering his stepson.  Despite this incident, two adjoining counties began sending their criminals to Allen County for incarceration in the jail during the later 1870s.
In 1904, the county remodeled the jail and made cells in the upstairs area.  The outside stairway was removed and the door sealed.  The narrow stairway inside was built and the upstairs was divided into cells with steel doors and metal walls.  There was a Women's Detention Cell and the room at the northwest was used as an office for the jailer or sheriff who also had a room or office in the Allen County Courthouse.

With the opening of the new Allen County Courthouse and its modern jail facilities, the old county jail was finally closed in 1958.  Late in 1959, a special act of the Kansas Legislature allowed the Allen County Commissioners to give the deed to the jail to the Allen County Historical Society.  This same year, the Society acquired the Museum Room within the courthouse to store their collections materials.

The Historical Society began remodeling and repairing the building so that it could be opened as a museum.  The Old Jail Museum was opened to the public on May 20, 1962 and had 1,677 visitors from 29 states during the first month it was opened. During the first several years, the Old Jail Museum also housed the Historical Society’s collection materials that could not be placed in the Museum Room of the Courthouse. In 1977, the U.S. Department of the Interior placed the Old Jail on the National Register of Historic Places. Just two years later, in 1979, the Historical Society received a deed to a new museum building from the county as part of an economic development program. The Gallery Museum, as it was referred, was located next to the Old Jail at 207 North Jefferson Avenue.  This building now also housed the historical collections that had previously been stored in the Old Jail and the Museum Room of the new courthouse.