Operating the Home as a Museum 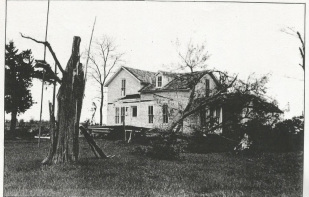 THE YEARS OPERATED BY THE KANSAS STATE HISTORICAL SOCIETY (1955-1979)
In 1955, members of the family gave the Funston home and the land immediately surrounding it to the State of Kansas as a museum in honor of Major General Frederick Funston.  The major donor and force behind this gift was the General’s sister, Ella Funston Eckdall.  Mrs. Eckdall spent $18,000.00 restoring and repairing the house before it was given to the State.  The Kansas State Historical Society operated the house as a museum from 1955 until 1979.  The family returned some of the original furnishings to the home, and the family gave other furnishings of the 1880s and 1890s to the museum.

Through the years of operation by the State, the home was not well maintained and continued to deteriorate.  In 1979, the house was closed to the public, and the following year, the furnishings and artifacts were removed to the Kansas State Historical Society in Topeka.  An “inland hurricane” in 1986 extensively damaged the house, and the following year the State spent funds and used labor from the Toronto Honor Camp to stabilize the house, though the interior was not restored.  Soon thereafter, the Kansas State Historical Society decided that it would divest itself of the ownership of about one-half of the historic sites that it owned, and the Funston home was on its list. 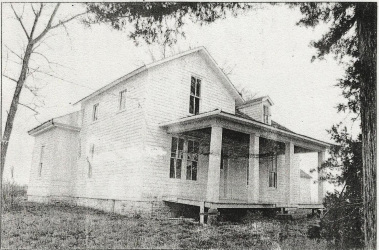 THE PRESERVATION AND RESTORATION OF THE HISTORIC BOYHOOD HOME OF MAJOR GENERAL FREDERICK FUNSTON
This project originated on June 19, 1991, with a meeting called by Clyde Toland of Iola. He is an attorney by profession, and served from October 1990 until October of 1995 as the volunteer president of the Allen County Historical Society. As a private citizen, he called this meeting of interested local persons and of representatives from the Kansas State Historical Society to discuss the future of the Funston home. Later that year under Mr. Toland’s leadership as Society president, the Society adopted the preservation of the Funston home as a project. At all times thereafter, he provided the vision, leadership, organizational skills, strategic planning, gratis legal services, the majority of the fund raising, and innumerable volunteer hours to make the preservation of the Funston home and its restoration a reality. Without his dedication and perseverance, the Funston project would not have occurred. On June 19, 1991, in response to an invitation from Clyde Toland, president of the Allen County Historical Society but who was acting individually, interested persons met the discuss the option of preserving this historic home by moving it to Iola.  Thereafter, under the leadership of President Toland, the Society adopted and implemented the preservation of the home.  The Funston Project of moving, restoring, and opening the Funston Home as a museum and of erecting the Funston Museum and Visitors’ Center was the vision of Clyde W. Toland, President of the Allen County Historical Society, Inc., from October 1990 to October 1995. Without countless volunteer hours of work on his part and without his untiring leadership, dedication, and determination, the Funston Project would not have happened.

The initial efforts in late 1991 to relocate the Funston home into Iola were unsuccessful when the City of Iola declined in December of that year to donate a city owned site for the project and to provide any funding. If this step had been successful, then the next step would have been to solicit from the State of Kansas the funds necessary to move the home and restore it.

The following year of 1992 Mr. Toland explored with the national office of the Veterans of Foreign Wars the feasibility of their funding the preservation of the Funston home. He also explored with U.S. Senator Dole’s office the feasibility of incorporating the Funston home into the National Park Service. Mr. Toland concluded that neither alternative was viable, and thus all these preliminary efforts to preserve the house ceased.

There matters stood until the following year of 1993, when a bill was introduced in the Kansas Legislature to permit the State as the owner of the home to, essentially, sell, give, or otherwise dispose of it. Mr. Toland testified in opposition to this bill at the committee hearing. The bill passed, however.

Since it was clear that the State of Kansas was determined to dispose of the house, and equally clear that neither the State nor the City of Iola was willing to provide the substantial funding necessary to move and restore the house, Mr. Toland concluded (1) that the local Allen County Historical Society should assume ownership of the house and contents and relocate them to Iola, and (2) that private funding, plus lottery revenue, would be the only viable route to accomplish this. The Board of Directors of the Allen County Historical Society concurred, and ultimately this final attempt to preserve and restore the home was successful. 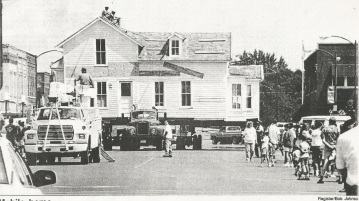 MOVING OF THE HOME
Ideally, the Funston home would have been left in its rural setting four miles north of Iola.  However, the planned move of U.S. Highway 169 from in front of the home to east of Iola in the following years, would have left the home somewhat isolated on a country road.  Additionally, it was not practical for the Society to operate the home as a museum four miles out of town.  Thus, the Society saw as its only option the move of the home into Iola.

After two other Iola sites were considered as a new location, the Society selected in 1993 the vacant tract on South Washington Avenue across from the courthouse square. This tract had been vacant since a fire in 1990, which resulted in the razing of five business buildings. Most of this tract was donated by the respective owners for the Funston project, and the funding of the project bas been totally by private donations of money and services except for a $24,500 grant from lottery funds as a part of the Economic Development Initiative Fund of the State of Kansas. By July of 1994, approximately $124,000 had been raised for the moving and restoration of the Funston home and two outbuildings. No tax dollars were involved in this project.

Mr. Toland worked closely with Representative Doug Lawrence, in whose legislative district Iola is located, first to obtain the essential legislation providing for the transfer of the home and the contents to the appropriate parties if the project materialized, and then on the legislation which ultimately led to obtaining the $24,500.00 grant from the Economic Development Initiative Fund. Mr. Toland preformed gratis all of the legal work involved in the project; secured the donation by four of the five owners of a tract of land in downtown Iola as the site for the Funston home; and handled on behalf of the Society the purchase at a reduced price of the balance of the tract from the fifth owner (there previously were located on this site five adjoining business buildings which had been razed as the result of a fire in 1990).

The official announcement of the impending Move of the Funston home was made on July 5, 1994, at the Society’s summer meeting. A few days later, Brooks House Moving of Girard, Kansas began to raise the home from its foundation. On July 28, while hundreds watched, the Funston home was moved to Iola and was followed two days later by the storehouse and three-hole privy. The home was completely restored inside and out by M.C.M. Restoration, of Fort Scott. On May 9, 1995, after the installation of a security system, the Funston furniture and artifacts were delivered from the Kansas State Historical Society to the home. 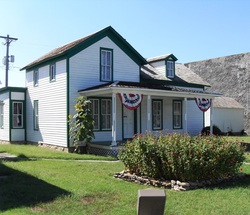 RESTORING THE HOME
The years of 1994 and 1995 saw the relocation from its rural setting to downtown Iola, Kansas, of the historic Funston home and then its restoration to its Victorian era appearance. On June 17, 1995, the restored home, the original part of which dates to about 1861, was dedicated and opened to the public as a museum. Since then more than 1500 persons have toured this historic structure.

Mr. Toland personally solicited the majority the approximate $100,000.00 in private funds which were raised for the project. He also obtained donation of various services, including all of the title work involved on the five separate ownerships of the new site and professional advice from a local architect interested in historic preservation.

The Funston Home was moved to Iola on July 28, 1994, and, after being restored, the Home was dedicated and opened as a museum on Saturday, June 17, 1995. Fred’s nephew, 88-year-old Frank Funston Eckdall, delivered the keynote speech.

Under the leadership of Robert G. Hawk, who was elected President in October 1995, and Michael Anderson, Curator, the Funston Museum and Visitors’ Center was erected in 1996 and opened on June 22, 1997.

Others were also involved in this project, of course. The Society’s Board of Directors consisted of eleven volunteers from throughout the county, and the Board, which ordinarily met monthly, had to meet twice monthly for more than a year in order to keep up with the responsibilities of the project. Some of the Board members performed physical tasks in connection with the project, including making curtains for the home; polishing long unpolished furniture; designing and installing plexiglass barriers which permit maximum viewing of certain rooms without providing access; recruiting workers and then coordinating and supervising the installation by them of the Bandera limestone walks; and planning and implementing the details of the dedication ceremony.

During the term of the Funston Project a total of $209,887.77 cash was donated for the project. All donations are from private sources except for a $4,800.00 donation from the City of Iola Tourism Fund and a $24,500.00 grant from the State of Kansas Economic Development Initiative Fund, which is funded by the state lottery. Other donations include goods and services and most of the land for the site of the Home and Museum.

We gratefully acknowledge these many generous donors, who helped to turn a vision into a reality. Their names are inscribed on these plaques. (This was taken from one of the six donor plaques at the Funston Museum/Visitors’ Center. The remaining plaques contain the names of those who donated to the project and their city of residence. Three-hundred and eleven contributors are listed on these plaques.)